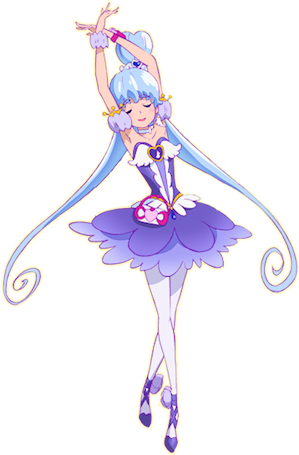 Perfectly fine for an arabesque, but she's liable to twist her ankle in a costume like that...if the hair doesn't trip her first.
Advertisement:

In fiction, the frillier the tutu, the prettier. Ribbons, flowers, flounces, and all kinds of flowing and fluttering stuff, help to make a costume look very pretty on the ballerina.

This is not all Truth in Television; ballet costumes follow certain standards to ensure nothing gets caught to other dancers or worse, in anyone's legs. The skirt is made of tulle and full and light enough to allow any arabesque. The ribbons on pointe shoes end around the ankles and the ends are tucked in, never left fluttering. Flowers, ribbons, feathers, and other trimmings are likely to be sewn in to ensure nothing gets loose to end up under anyone's foot.

Artists, of course, like to forget about occupational hazards when it comes to these, due to the Rule of Glamorous, and so fictional ballerinas end up dancing in costumes that would in real life be hazardous for any number of the reasons mentioned at the top, as well as reasons relating to their hairdos (there's a reason why a Prim and Proper Bun is part of standard ballet attire in Real Life).

Figure skaters in fiction have also been known to wear such costumes, though not quite as often as ballerinas. In anime and manga, Magical Girls can wear such outfits as well, even if they're not ballerinas.

A Sub-Trope of Impractically Fancy Outfit and Pimped-Out Dress.