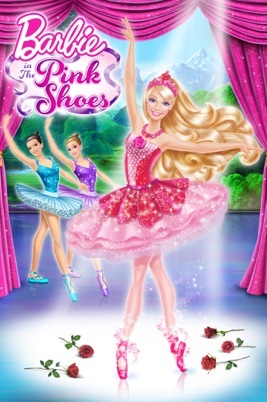 Barbie in The Pink Shoes is a member of the Direct to Video Barbie filmography. It was released in 2013, preceded by Barbie as the Princess and the Popstar and followed by Barbie: Mariposa and the Fairy Princess.

Pink Shoes adapts popular ballets such as Giselle and Swan Lake while telling its own original story, loosely based on the fairy tale of The Red Shoes. It also borrows inspiration from The Snow Queen.

Kristyn is a ballerina with big dreams, but her teacher, Madame Natasha, criticizes her free spirit and improvised choreography. When she slips on a dazzling pair of pink ballet shoes, she and her best friend Hailey are whisked into a magical world of ballet.

With the shoes, Kristyn is able to dance everything perfectly—but she dances so well she doesn't want to take them off. And when she goes off the stories' rails, the evil Snow Queen begins a hunt for her in a desire to make everything perfect...

Listen to the beat of your heart and keep on dancing.
— Barbie