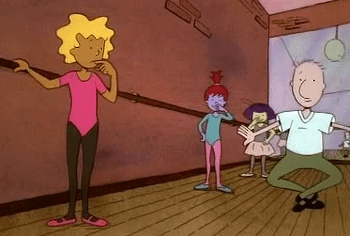 Sometimes in a series, one or more main characters will get the desire to try some ballet. In that episode, there will be a ballet thematic permeating the milieu. Expect some music from one of Tchaikovsky's three ballets (or from some other ballet) to be played at some point. Expect someone to wear a tutu and tights. And especially expect a lot of dancing.

This trope concerns those episodic installments where ballet plays an important role in the plot, in stark contrast to the larger work of which it's a part. It may be in the form of someone going to a ballet class or performing in a show or just going to the show/rehearsal, but such episodes will often make reference to classical ballet within their story, and it's a sure bet at least one of the main characters will be involved.

The following scenarios are possible for such installments:

Around half the time it will be a boy taking up ballet. He will be ridiculed by the others, but still shine through in the end. Another typical plot element is having a male character appear in female ballet attire. Good for cheap laughs.