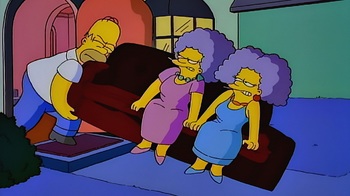 Homer is blackmailed by Patty and Selma after losing his mortgage money on a bad investment. Meanwhile, Bart is forced to sign up for ballet class after coming to school late on the day the kids pick their favorite sports to play in gym class, and a Russian ballet teacher (voiced by Susan Sarandon) convinces Bart to embrace the allegedly girly dance.

Tropes used in the episode