Exiled to the Couch 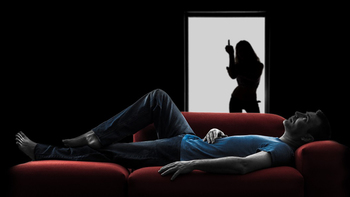 "Oh, why did women invent sleeping on the couch?"
— Homer Simpson, The Simpsons
Advertisement:

A common scenario amongst married and other live-in couples. The two are in an argument. Argument escalates. One of them makes a stupid/incendiary remark that angers the other one, who then shouts "That's it! You're sleeping on the couch tonight!"

So engrained is this trope in popular culture that even couples occupying homes clearly large enough to have space for a guest bedroom find themselves enduring an uncomfortable night crammed on the sofa in the living room.

For some strange reason, it's usually the wife who's the exiler, and the husband the exilee. In this case, it's often implied that the real punishment is withholding sex, but since early tv couldn't be that explicit, sleeping on the couch became a visual cue for marital strife, which has persisted into the present day.

In extreme cases, this can happen every night with couples who have given up on their marriage but have not yet separated.

A common trope in Dom Com shows, and a case of Truth in Television. (Another possible reason for exile involves snoring. Probably more common in real life, less common on-screen.)

See Lysistrata Gambit when the punishment is explicitly about sex. Not to be confused with Sexiled, where your roommate's sexual escapades leave you temporarily homeless. Compare to There Is Only One Bed, where two characters who aren't in a relationship have to share a room but aren't comfortable sleeping together in one bed.