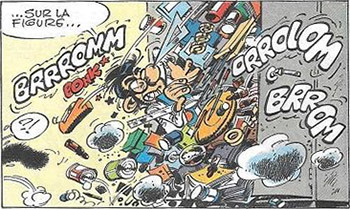 A character opens a surreptitiously bulging door to a storage area, and is buried in an avalanche of junk, followed by a skier or something if the authors are feeling particularly silly.

The set-up may often involve another character trying to clean up in a hurry (and by "clean up", we mean "just hide all the mess somewhere").

If the closet is continuously left in complete and utter chaos as a Running Gag, no-one will bother to organize this closet, and instead opt to quickly open it, retrieve what they need, and hastily shut it in one smooth movement.

Later, a character who is oblivious of the closet's nature innocently opens it, only to be buried under a heap of cleaning tools, souvenirs, novelties and whatnot.

Apparently, all household junk is rubbery and spongy enough that you can squeeze a roomful of the stuff into a single foot-deep closet, as long as you're strong enough to force the door shut afterward. Given the fact that many of these knickknacks can be comfortably squeezed into (and pulled out of) thin air, this may not be that inexplicable. Alternatively, the closet could just be really large on the inside.

If it's people tumbling out of a closet or similarly tight space, you've got The Stateroom Sketch. If it's letters that come pouring out of a mail slot, it's Bags of Letters.

Sometimes Truth in Television, but older. It was most notably the subject of a Running Gag on the popular radio series Fibber McGee and Molly — the former trope namer. Compare Closet Shuffle. Has nothing to do with actually blowing up closets, not with Transparent Closet, which is more metaphorical.