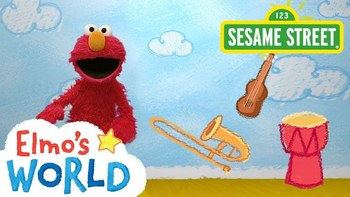 Elmo's World was a segment featured at the tail end of each Sesame Street episode from 1998 to 2012. The segments were produced from 1998 to 2009, and were aired on new Sesame Street episodes up until the 2012-13 season, when it was replaced by "Elmo: The Musical". However, a retooled version of the show was introduced in 2017, with a shorter format, new songs replacing the old ones, and the addition of a talking smartphone named Smartie. Recuts of the original episodes are shown in addition to new ones.

The Elmo's World segment focuses on one subject throughout its 15-minute course, and numerous skits, anecdotes, puns and other gags all center on that subject. The routine is almost entirely rigid, so it's only proper that the tropes start off with...

What are some other tropes appearing in Elmo's World? Oh, good question, Dorothy!

Thaaaaat's Ellllmoooo's WOOOOOOOOORLD!
Statler: That's it? That's what's special about Elmo and his world?
Waldorf: What do you expect? Maybe it's because he's the only Muppet with lots of exaggeration!
Both Do-ho-ho-ho-ho-ho-ho-hoh!