Just For Fun / Statler and Waldorf 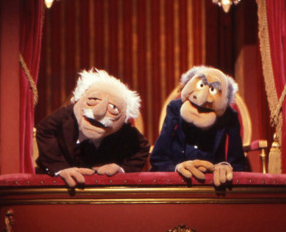 Statler: They're still here! Don't they know this site will ruin their lives?
Waldorf: You can't ruin what you don't have!
Both: Do-ho-ho-ho-hoh!
Waldorf: The internet is a completely different culture, isn't it?
Statler: You said it. Everything here is immediately followed by sarcastic comments and nasty responses.
Waldorf: Yup, we're finally where we belong.
Both: Do-ho-ho-ho-hoh!
— Muppet Viral Videos, "Meh"

Statler and Waldorf are two side characters from The Muppet Show whose entire purpose is to heckle and insult the rest of the cast, along with each episode's guest (and sometimes even each other). They're the Greek Chorus for the Muppet universe, best known for The Stinger that they drop

, almost always containing yet another crack at the show followed by their signature "Do-ho-ho-ho-hoh!". You can find the tropes associated with them on the character sheet for The Muppet Show.

As the first page quote indicates, they have discovered where people like them reside. Finding their places in the world, they choose to lurk among them.

Good snark being a precious inspirational resource, it's no surprise then that Statler and Waldorf have been appearing in other media. They've set up shop in YouTube

, as well as here on TV Tropes. Though not nearly as well known, this pushes them into the group of memetic characters who inhabit the wiki along with Trope-tan, BRIAN BLESSED, The Advertisement Server, Alice and Bob, Report Siht and many others.

Oh by the way, do you know where they got their names from? The two largest hotels in New York City, the Statler (now the famous Hotel Pennsylvania—the one right across Seventh Avenue from Penn Station—known for its world-famous phone number from the 1940s Glenn Miller tune of the same name, [+ 1 (212)] PEnnsylvania 6-5000), and the Waldorf (now the Waldorf-Astoria). In fact

, Astoria is Waldorf's wife (who looks an awful lot like Statler). A little bit of trivia, exclusively for TV Tropes readers.

If you wish to have them visit a page, please bring it up in one of the discussion pages (either here

or for the page in question).

Pages upon which Statler and Waldorf wish to make their opinion known: