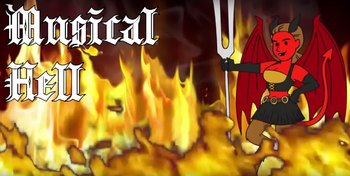 Greetings, mortals!
A Video Review Show created by Christi “The Diva” Esterle in 2012, Musical Hell is hosted by Diva, a demon With An F In Evil who has been shuffled off onto a small expansion shelf somewhere between the third and fourth circles of the Inferno. There, her job is to evaluate and punish the sins of the worst movie musicals ever created. The series posts once a month to RVT, RT Gomer Productions, and its own site

Musical Hell runs in tandem with ‘‘Know the Score,’’ a Lighter and Softer companion piece that discusses soundtracks, film and stage musicals, theme songs, and any other form of “dramatic music” that happens to strike Diva’s fancy.

Musicals on which Diva has passed judgement:

Know the Score contains examples of: