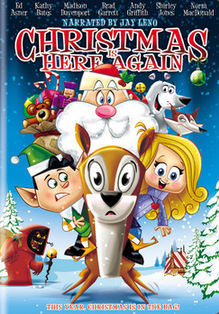 Christmas is Here Again is a direct to video animated Christmas Special produced in 2007 by Renegade Animation. The story begins one night when Santa Claus' sack is stolen by an evil being named Krad, forcing Santa to cancel Christmas. Thirty years pass by with no visits from Santa.

Then one day an orphan named Sophiana finds one of Santa's elves trapped in ice. After being freed from the ice, the elf, named Paul Rocco, is shocked to learn that nobody knows what Christmas is. Together they set off to find Santa's sack and retrive it so that the world can know Christmas again.

Rocco: (refusing to give the sack) I will protect this sack before my dying breath!
Krad: (to Rocco) I said HAND IT OVER!!!!!
Rocco: (nervously, giving him the sack) Here you go.
Sophianna: Why would you do such a terrible thing like steal Santa's sack?
Krad: (breaks into song) Why do zebras have stripes? Why do the Scottish play bagpipes? Some things just are. Me? I'm evil. Always have been, ALWAYS will be...evil...