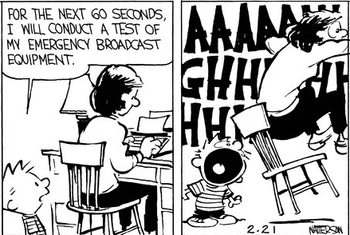 Some day when the house caves in, she'll thank me.
"Do not let my calm demeanor fool you, RANGER!"
— Marshal Stacker Pentecost, Pacific Rim

Two characters are carrying on a conversation. Alice says something. Bob responds in his regular voice, but then SUDDENLY HE'S SHOUTING!

Typically happens for one of three reasons:

Compare Careful with That Axe and Last Note Nightmare, which apply a similar sort of logic to music. Sometimes overlaps with Punctuated! For! Emphasis!, Bait-and-Switch Comment, or HA HA HA—No. Not to be confused with Suddenly Susan or the song "Suddenly Seymour".

open/close all folders
Advertising COMMERCIALS!
Anime and MANGA!
Comic BOOKS!
Comic STRIPS!
Fan WORKS!
Film — ANIMATED!
Film — LIVE-ACTION!
LiteraTURE!
Live-ACTION TV!
Musical COMPOSITIONS!
Professional WRESTLING!
Puppet SHOWS!
RolePLAY!
TheaTRE!
Stand-Up COMEDY!
Video GAMES!
WebCOMICS!
Web ORIGINAL!
Western ANIMATION!
Kipo Oak: "Up on top, on my own,
A human girl, so far from home,
The flowers are big,
And the bees are weird,
It's dangerous, just like I feared,
On the surface worl—(Giant bird suddenly flies in and attacks Kipo)
AAH! STAY AWAY!"
This page is done, so WHY ARE YOU STILL READING?!
Feedback

Norman Osborn's reaction to the news that Oscorp's board of directors is selling the company to Quest Aerospace, and he has to resign from his position as CEO.

THE KEY IS GONE!

Norman Osborn's reaction to the news that Oscorp's board of directors is selling the company to Quest Aerospace, and he has to resign from his position as CEO.

THE KEY IS GONE!