Film / The Night of the Grizzly 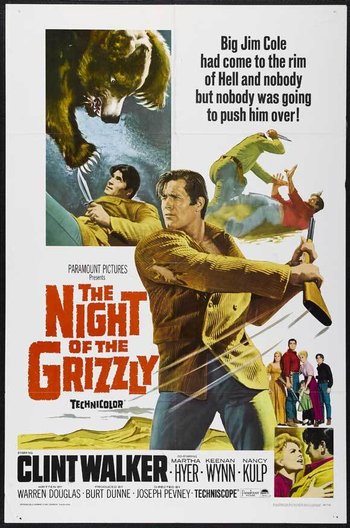 The Night of the Grizzly is a 1966 Western starring Clint Walker, Martha Hyer, Jack Elam, Keenan Wynn, and Leo Gordon.

Ex-lawman Big Jim Cole and his family have moved to Wyoming to start a simpler and safer life on a ranch. However, financial troubles and the machinations of the unscrupulous town boss Jed Curry—who wants their land for his no-good sons—soon land them on the edge of ruin. And then there's Old Satan, a just plumb mean grizzly who eats hunting parties for breakfast and has taken a special liking to the cows on the Cole ranch. Big Jim is in danger of losing everything, if he doesn't kill Old Satan—first.

Tropes present in this movie