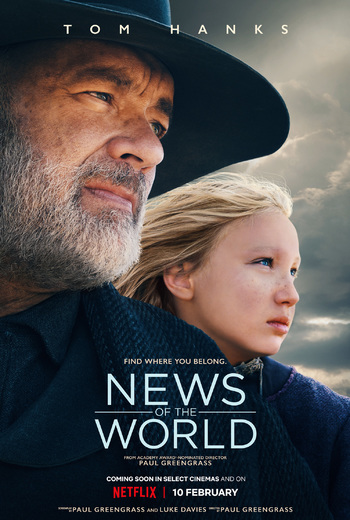 News of the World is a 2020 Western film directed by Paul Greengrass. Based on the novel by Paulette Jiles, it stars Tom Hanks and Helena Zengel.

In Texas in 1870, Captain Jefferson Kyle Kidd (Hanks) is a "newsman," who travels from town to town reading the news to paying audiences, helping them escape their local troubles and stay connected with the outside world. On his way between towns, he finds a young girl, Johanna Leonburger (Zengel), who, despite being white, is dressed in Native American clothes and only speaks Kiowa. Discovering she was kidnapped and raised by the Kiowa after her parents and siblings were murdered in a raid on her family homestead, Kidd resolves to take her to her aunt and uncle in Castroville. All of this plays out against the backdrop of post-Civil War Texas, which has still not been restored to the Union and where watchful federal troops keep order on a disgruntled population, and where conflicts with and dispossession of Native Americans keep tension high and violence an ever-present risk.

The film was released by Universal on December 25, 2020 in the United States, making its premium video-on-demand debut 3 weeks later as part of the studio's COVID-19-induced arrangement with theater chains. It was released on February 10, 2021 in other territories via Netflix.

Alternative Title(s): News Of The World