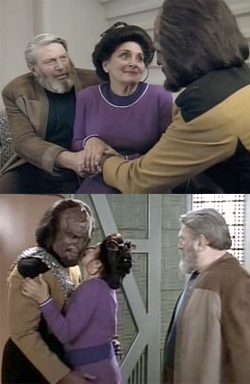 And after these heartwarming scenes, everyone had some of Mrs. Rozhenko's delicious Rokeg blood pie.
Advertisement:

One of the classic story hooks is for an orphan child from a strange land be raised by the people native to the land he or she finds themselves in. His origins (the orphan is usually a boy) and the purpose of his parents' trek so far from home is a mystery, but they'll usually face an accident of some kind that wipes them all out save for him. Whatever the case, the child will be adopted by the chief and raised as one of his sons.

Growing up will be tough, he's likely to face discrimination from other children if not the tribe itself, and even without that he'll feel as out of place as somebody of mixed ancestry.

When he grows up and finally feels at home after the tribe accepts him (or alternately, feels the most out of place and restless) his parents' people will show up. At best, they're peaceful(ish) and want to reintegrate him into their society, usually helped by a family member coming along who can connect him to the memory of his biological parents. In this case, he'll help resolve potentially deadly conflicts between both peoples and find a place as a mediator. At worst, it'll be a violent Culture Clash because they're conquerors, slavers, or very violent settlers who may or may not turn his village into a Doomed Hometown. Expect this to galvanize him as a pro-native hero.

A common variant is to have the kid be Mighty Whitey raised to be a Noble Savage, uniting the most powerful traits of both (being mighty, white, noble, and a savage!) and getting rid of his invading relatives. More seriously, this can be used to give western audiences (the orphan is usually a Caucasian in a non-European continent) someone to relate to who can defend the natives of the place from "evil" Caucasians.

Raised by Wolves often functions as a subtrope. Compare with Oblivious Adoption, Jungle Princess, and Upbringing Makes the Hero. Contrast Raised by Humans (as that trope involves the adoptee not being considered a fully sentient being), Raised by Orcs (where the adoptee is raised by a family from an enemy culture), and Muggle Foster Parents (which involves an empowered adoptee and non-powered fosters).