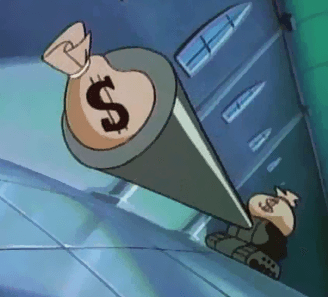 Talk about getting more bang for your buck.
With relatively low damage, the Money Bundle's main benefit is its reasonable knockdown value with quick swings and, of course, the comedic value of slapping cops around with a thick wad of cash.
— PAYDAY 2 Wiki on the Money Bundle
Advertisement:

Money has long been used to buy weapons useful in fights. But how about using money itself as the weapon?

Its effectiveness varies depending on what kind of money is used. Moneybags filled with coins could be a very heavy and therefore highly effective blunt weapon, while slapping someone with a sole dollar bill probably won't. Also, it is a great way to show about everyone (and especially your target) how filthy rich you are.

Subtrope of Improbable Weapon User and, in some cases, Improvised Weapon. Overlaps with Abnormal Ammo when the cash is shot out of another weapon. Sister Trope to Gemstone Assault, which also uses valuables as weapons.

See also Bling-Bling-BANG!, in which the weapons are unusually fancy to show their user's wealth without being money; Cast from Money, an ability (not necessarily an attack) that drains money with each use while not necessarily weaponizing the money itself; and Crimefighting with Cash, where the money is spent to achieve the owner's ends.