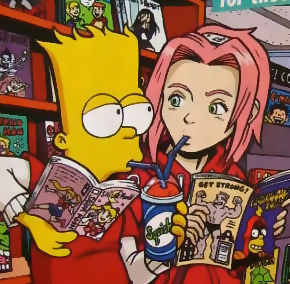 Two people from separate universes (or at least different towns) meet in a crossover work. They fall for each other, or at least have a fling, but more likely than not they're split up in the end. They are from different works, after all.

Crossover Couples occur when characters from separate works, be they in a Shared Universe or different universes, are paired up. This is usually a gag at best and is rarely taken seriously, with even more serious attempts rarely getting mentioned outside of the crossover itself.

For simplicity's sake, this trope refers to non-canon and semi-canon material as long as they're official. Fanworks, licensed works, and parodies also apply if they ship characters during crossovers.