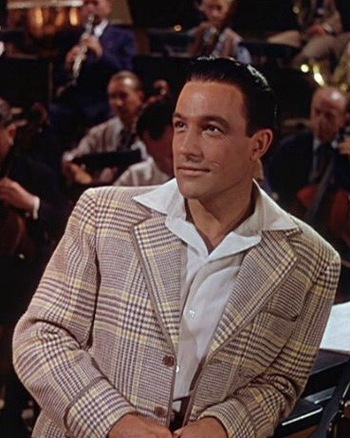 Eugene Curran Kelly (August 23, 1912 – February 2, 1996) was an American dancer, actor, singer, choreographer, and director. You may remember him as the guy who performed a whimsical ditty in inclement weather.

Born and raised in Pittsburgh, Kelly began his career on stage, dancing in such Broadway shows as Leave It to Me, One for the Money, The Time of Your Life, and Pal Joey. It was while starring in the latter that he was signed by film producer David O. Selznick, who took him to MGM. There, Kelly became a megastar by appearing in a string of famous musicals, often doing his own choreography. His biggest successes in the post-war period were An American in Paris, On the Town, and his iconic role in Singin' in the Rain (he also co-directed the latter two with Stanley Donen).

Though he usually tended to play "heels", Kelly's performances gave the impression that anyone — be they athletes, sailors, or Joe Sixpack — could sing and dance. (As he once put it, "Fred Astaire represented the aristocracy, I represented the proletariat.") This quality was further evidenced by his trademark outfit, which consisted of a polo shirt, white socks and loafers. The white socks were handy for protecting his feet; Kelly later shared this tip with Michael Jackson, which led to the singer's trademark look.

His biggest ambition lay not in acting, however, but in dance choreography and he developed a style which looked and felt as if he were making up the moves in the moment. This improvisational style is famously seen in Summer Stock, in which Kelly's character creates music out of a squeaky floorboard and a sheet of newspaper. He also revolutionized the way dance numbers were filmed by having the camera not just pan from side-to-side but move forward and backward, as well, and incorporating those camera movements into his choreography. This technique gave his routines a visual depth and kinetic energy that had never been seen before and is still being used to this day.

Kelly was among the many creative influences to whom Michael Jackson paid tribute in his "Beat It" and "Bad" videos. Paula Abdul also included a Shout-Out to him in her "Opposites Attract" video, in which she dances with an animated cat. Kelly was impressed by this and invited Abdul over for tea, sparking a friendship that lasted until his death.