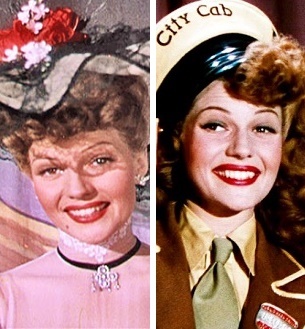 Rusty Parker (Hayworth) is a showgirl in a Brooklyn nightclub owned by Danny McGuire (Kelly), an ex-GI who was invalided out of World War II. Danny also lives across the hall from Rusty, and the two have romantic feelings for each other. On Friday nights, they go to Joe's Oyster Bar along with fellow club performer Genius (Silvers) and order oysters, looking for a pearl to bring them luck. This cozy routine is disrupted when Rusty wins a modeling opportunity as a cover girl for Vanity magazine.

Rusty is selected for the job largely because she reminds the publisher, John Coudair, of his lost love Maribelle Hicks. When he learns that Rusty is Maribelle's granddaughter, he takes an even more personal interest in her career. Through flashbacks, we see the story of John and Maribelle (also played by Hayworth): Maribelle was a vaudeville star at the turn of the twentieth century, and John was the son of a wealthy family. He showered her with gifts and attention, but she insisted that she didn't belong in his world—and no matter how hard he tried, he couldn't seem to make her forget a certain piano player.

John Coudair and his friend, theatrical producer Noel Wheaton, pressure Rusty to leave the nightclub for Broadway. She hesitates out of loyalty to Danny, but their relationship becomes increasingly strained. Coudair plays on Danny's insecurities, urging him to let Rusty move on to a better life, while Noel shows her his luxurious theatre to give her a taste of what he could offer her. This causes her to miss the Friday night oysters, and Danny, after tortuous self-reflection expressed by tap-dancing with a ghostly double of himself, decides to sever his relationship with her. The next day, Rusty is late for rehearsal, and Danny gives her song to another girl to perform. They argue, and Rusty storms out of the club, bound for Broadway.

Rusty becomes a star, and Noel asks her to marry him. She promises him an answer the next day and then goes to Danny's nightclub, but finds it closed. The watchman tells her that Danny and Genius are on a tour entertaining the troops. Depressed, she goes to Joe's Oyster Bar and gets drunk. When Coudair and Noel find her there, she agrees to marry Noel.

On the day of Rusty and Noel's wedding, Danny and Genius return to Joe's and order oysters. Danny finally finds a pearl, but seems uninterested in it and leaves it on his plate. Genius picks it up and takes it to John Coudair, urging him to give it to Rusty. At the wedding, as Coudair escorts Rusty down the aisle, he hands her the pearl and completes his story of his romance with Maribelle, revealing that she deserted him at the altar for her piano player. Rusty realizes that she belongs with Danny, and as the minister begins the wedding vows, she announces that she is leaving. Still dressed in her wedding gown, Rusty hurries to Joe's and is there reunited with Danny and Genius in a joyful dance.