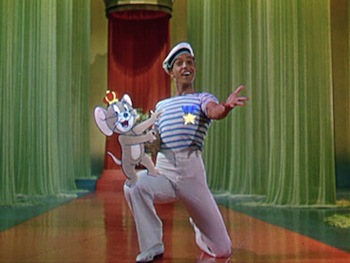 Anchors Aweigh is a musical-comedy from 1945 directed by George Sidney.

Two sailors, Joe (Gene Kelly) and Clarence (Frank Sinatra), meet a girl, Susan, on shore leave, after her nephew, Donald, tries to run away to join the Navy. Susan wants to be a singer, and Joe tries to help her career, but he's falling for her. Problem is Clarence has already fallen for her.

This film was the first to pair Sinatra and Kelly, and notable for a musical number with Jerry of the Tom and Jerry cartoons.

Also look for a young Dean Stockwell as Donald.

See also On the Town.