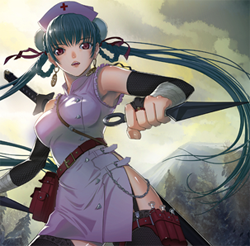 The doctor is in.

"When a doctor does go wrong he is the first of criminals. He has nerve and he has knowledge."
— Sherlock Holmes, "The Adventure of the Speckled Band"
Advertisement:

A Deadly Doctor, simply put, is someone who fights or kills with a medical motif. He uses his medical knowledge to injure, torture, or kill, and uses syringes, pills, or surgical instruments or medical techniques to achieve his goals. He may wear his lab coat into battle as a Badass Longcoat. Note that in Real Life this would generally be considered a gross violation of medical ethics.

Surely the ultimate example of the Morally Ambiguous Doctorate. One reason for this is due to all their training: while having advanced knowledge on the human body can be used to save people, it also gives all the knowledge on how to injure and kill people with minimal effort by knowing all the body's weak points. Some more sympathetic examples equate to the medical version of a Well-Intentioned Extremist, who may certainly have good (or at least sympathetic/understandable) intentions but ruthless medical ethics.

Unless, of course, he's good. Which there is a fairly good chance of, being able to heal as well as harm.

Note that this trope is not "Any doctor who is a good fighter." That would be Combat Medic. Deadly Doctor refers specifically to doctors who apply their medical knowledge to their combat techniques.

Can overlap with Mad Doctor. May use a Healing Shiv, and may even turn them into proper weapons. Compare Depraved Dentist and Strapped to an Operating Table for cases where medical skill is used as a weapon against a target who isn't in a position to fight back. Contrast Martial Medic, a character who heals with knowledge they gained in the course of learning to injure people. While people do tend to die around him (not his fault, we assure you), The Doctor is not one of these.

Not to be confused with a doctor who's just dangerously bad at his job; see Mad Doctor, Back-Alley Doctor, many instances of Dr. Feelgood and Meatgrinder Surgery.

Pretty much every game of Assassins Creed Multiplayer has at least one example.

Herman Carter - simply known as "The Doctor" - is one of the killers employed by the Entity, having been a torturer hired by the CIA for interrogation.

Herman Carter - simply known as "The Doctor" - is one of the killers employed by the Entity, having been a torturer hired by the CIA for interrogation.