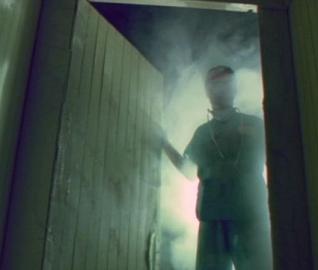 The Dead Pit is 1989 low-budget horror film, which was directed by Brett Leonardnote  (The Lawnmower Man, Virtuosity, Man-Thing and Highlander: The Source).

The movie starts with showing the Big Bad Dr. Ramzi, head surgeon of a mental hospital, taking patients and conducting cruel brain surgery experiments on them underneath the hospital's clocktower. He is confronted by his coworker Dr. Swan and is promptly shot. Swan, fearing for his career, seals the place and swears to keep the whole thing to himself.

Cut to twenty years later. Amnesiac woman "Jane Doe" arrives at the hospital. Her presence causes an earthquake and resulting tremors break the seal to Dr. Ramzi's lair, who now returns from the dead to exact revenge.

Descent among these examples: