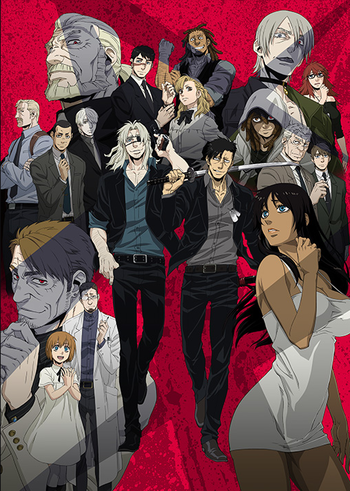 Handymen, at your service.
Advertisement:

Gangsta. (often stylized GANGSTA.) is a Seinen action manga written and drawn by Kohske, which began serialization in Monthly Comic @BUNCH in 2011 and is still ongoing. It's set in what appears to be a Mediterranean country and follows the exploits of two Neighbourhood-Friendly Gangsters, Nicolas and Worick. You see, Nicolas and Worick are "Benriya," ("Handyman") bodyguards-for-hire. They take jobs from gangs to prostitutes to cops and everyone in-between. While on a job, they cross paths with Alex, a former prostitute and hire her as their secretary.

A character page is still in the works. Additions are welcomed.

An anime adaptation by Manglobe, its last series before shutting down due to financial issues, began airing in July as part of the Summer 2015 season. Funimation releases subbed episodes for members to stream.

The series has a spin-off mini-series focusing on Marco Adriano's past called GANGSTA:CURSED.: EP_Marco Adriano.

Not to be confused with Gangsta Rap, Gangsta Style, Neighborhood-Friendly Gangsters or Damn, It Feels Good to Be a Gangster!, though that pops up quite a lot. Also, despite the name, conventional Gangbangers are a no-show in Gangsta.