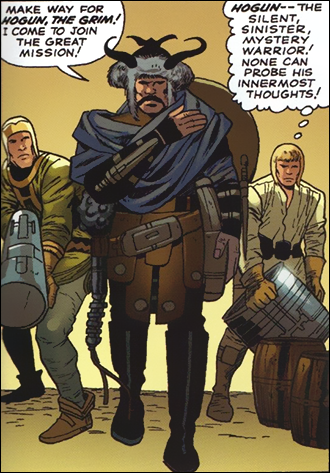 "Everyone is polite. Everyone smiles and bows. But beneath their courtesy I detect a deep reservoir of feeling."
— Nathan Algren, The Last Samurai
Advertisement:

Throughout the years, people from East Asia have been depicted in European media as being more reserved and stoic than Europeans. This comes from how the comparatively individualistic culture of Enlightenment-era Europe saw Confucianism, then the dominant philosophy of East Asian (Chinese-dominated) cultures. Due to Confucianism's priority of social harmony and filial piety over individual freedom of expression, it had become stereotyped as collectivist and repressive, like how Stoicism came to be negatively portrayed in modern culture as "emotional repression". Europeans also saw East Asian culture as exotic: very similar to Western culture and advancements, but at the same time alien and mysterious, though there was a beauty and intellectualism in their alien-ness. In other words, East Asians had become a real-life equivalent of Elves, including the ancient wisdom that would make them win an argument with a Western gaijin every time.

If treated positively, a character who follows this trope can come across as being a calm, cool, polite and fairly collected (if a bit eccentric) person who may also serve as a source of wisdom and encouragement. If treated negatively, characters come across as being overly dour, uptight, dull, and all around boring fellows who seem to have trouble comprehending concepts like leisure or fun. The distinction is similar to that between Stiff Upper Lip and British Stuffiness, respectively.

This can be shown tropewise as being The Stoic in more serious and/or positive portrayals. And as The Comically Serious or Only Sane Man in more comedic and/or negative portrayals. The Old Master may also be this trope.

All in all, this trope can be described as the Eastern counterpart to Germanic Depressives. Any kernel of truth in the stereotype can be attributed to the one universal social mannerism throughout East and Southeast Asia of "maintaining face", and which British people would understand: Don't make a fuss.

One reason for this trope being less popular nowadays is its association with offensive Yellow Peril villains, who were frequently untrustworthy, scheming Chessmasters who used their lack of emotion to disguise their motives.