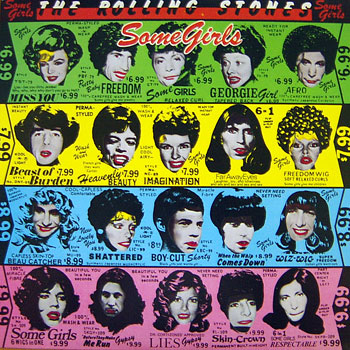 "Some girls give me diamonds. Some girls, heart attacks. Some girls I give all my bread to. I don’t ever want it back!"note The original album artwork before it was edited
Advertisement:

Some Girls is the fourteenth studio album (sixteenth American album) by The Rolling Stones, released in 1978. It is generally considered to be (alongside Tattoo You) the last classic Stones album, and marks the first full-length appearance of Ronnie Wood. Songs like "Miss You" and "Beast of Burden" became international hits.

The album is equally known for its cover, featuring the faces of the band members in cut-out heads along with the faces of famous Hollywood actresses. When Lucille Ball, Farrah Fawcett, Liza Minnelli (who didn't appear on the cover, but her late mother Judy Garland did), Raquel Welch, and the Marilyn Monroe estate threatened legal action the album was quickly reissued with a revised cover that had their faces replaced on the sleeve with a message reading: "Pardon our appearance. Cover under re-construction."

The album reached #1 in the US and #2 in the UK, and received a Grammy nomination for Album of the Year (the only Stones album to do so).