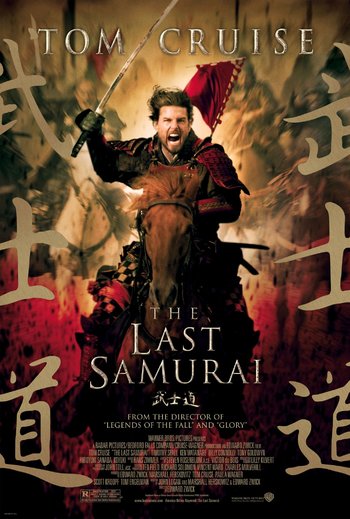 "The tiger's eyes are like my own
But he comes from across a deep and troubled sea..."
— General Moritsugu Katsumoto
Advertisement:

The Last Samurai is a 2003 American film directed by Edward Zwick. Tom Cruise stars as Nathan Algren, a veteran of The American Civil War and the campaigns against the American Indians, in the course of which he served under General Custer. The wars are well and truly over, but Algren is still haunted by what he has seen, and done, and scrounges out drinking money to sustain his chronic alcoholism by endorsing rifles. He's given an opportunity to go back to what he's best at — fighting — when his former boss recruits him to aid the Japanese Empire. The Meiji Emperor has been rapidly modernizing the country with the 'aid' of men like Omura, the most powerful man among the oligarchy which controls the emperor and the country from behind the scenes. Nathan is asked to train a force of the country's newly-formed national army in the art of modern warfare. His assignment comes with the knowledge that a group of Samurai, low-ranking nobles similar in rank and role to the Knights of medieval Europe, have risen up in rebellion against the oligarchy in the name of the Emperor. The rebels claim that the radical programme of modernisation endorsed by Omura is in fact a programme of 'westernisation,' one that is destroying the Japanese way of life.

In Japan, Algren has his work cut out for him. His recruits are completely raw and he must start their training from scratch. Too soon, the rebel samurai army attacks. In spite of their inferior numbers and weapons, the samurai slice through Algren's undisciplined troops. Preparing to die on his feet, Algren engages a samurai in single combat and manages to kill him. After watching Algren's Last Stand, the samurai general Katsumoto realises he's had a vision about this same scene (depicted at the film's start, with Algren now revealed as the white tiger he saw) and decides to spare Algren's life.

Trapped in Katsumoto's camp for the winter, Algren finds himself comfortably appointed in a family's house as more of a guest than a prisoner. He grows to sympathize with his hosts and appreciate the way of the samurai. When the opportunity comes to leave, Algren chooses to switch his allegiance and help the samurai against the forces of modernization. After battling assassins and forming a subdued romance with the widow of the samurai he killed, Algren enters the final battle for the fate of the samurai and Japan.

Ken Watanabe, the fella who played Katsumoto, was nominated for an Oscar for his role.

The film is loosely inspired by the actual historical events, but for their part they do not even attempt to claim Based on a True Story. All the major characters besides the Emperor were fictionalized and the actual events depicted went quite differently. The period saw two conflicts: the Boshin War, a revolutionary war/coup which saw the toppling of the Tokugawa Shogunate and 'restoration' of the emperor - later known as the Meiji Emperor - as the head of the country (and as a puppet of the victorious rebels... until he implemented the same exact reforms the Shogunate tried to anyway). The second and smaller conflict was the Satsuma Rebellion, a rebellion chiefly of Samurai from Kagoshima Prefecture (the former Satsuma Domain) led by a man called Saigō Takamori a decade later. All the factions involved used firearms and were rushing to adopt more modern weaponry and tactics. Algren is based off French Army Captain Jules Brunet, who was dispatched by Emperor Napoleon III to train the troops of the Shogun shortly before the outbreak of the Boshin War. Plenty of Artistic License was used in order to tell a compelling story but the movie is still a loving look at Japanese culture, one that does well in capturing the spirit of the Meiji era.

Not related to the novel The Last Samurai by Helen DeWitt.