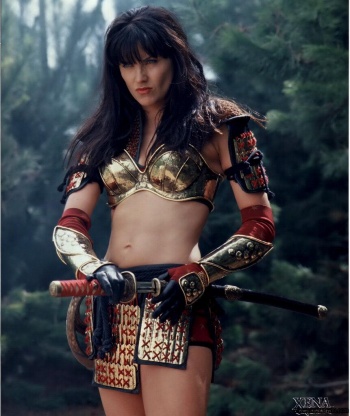 What do you mean, it's unrealistic? She has a katana, doesn't she?
Advertisement:

In real history, Japan had many periods with their own distinct politics, mindsets, and manner of dress. But in Hollywood, Japanese history is pretty much one long indistinct period filled with pagodas and geishas in strangely easy-to-remove kimonos, where Samurai and Ninja roamed the land chopping each other up with katana and shuriken at the slightest provocation. This is the land David Plath called Jawpen

— "this place of which so many Westerners have jawed and penned", a country "made up of traditional Japanese parts ... invented and assembled here in the West for domestic consumption."

The anime portrayal is somewhat more accurate, but naturally, Japan has its own stereotypes about its past. For a look at native Japanese anime and live action film depictions of this era, see Jidaigeki.

(Western) works that are set in this time period include: