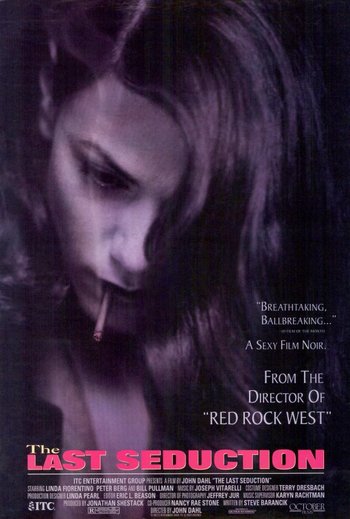 "Anyone check you for a heartbeat recently?"
— Frank Griffith
Advertisement:

A 1994 neo-Noir film directed by John Dahl, The Last Seduction stars Linda Fiorentino, Peter Berg, and Bill Pullman. It’s perhaps best known for being disqualified from Academy Award consideration that year due to airing on HBO just before it premiered in theaters.

Bridget Gregory (Fiorentino) is the manager of a direct marketing call center; she is also married to Clay (Pullman), a medical student. Clay is so smitten with her that, at her suggestion, he illegally sells pharmaceutical painkillers for a bag of cash. Then Clay makes a big mistake; in the emotional aftermath of his first crime, he slaps Bridget. She coolly steals the cash and skips town. Stopping in a small town for a drink, she meets Mike Swale (Berg), a divorced man who immediately falls for her. When Clay sends goons to track down his wife and stolen cash, Bridget decides to use Mike in an elaborate scheme to get her past off her back.