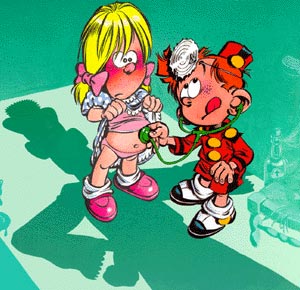 I'll show you mine if you show me yours!

Young children looking at each other without any clothes on.

Children tend to be very curious about things, including what the opposite sex looks like under their clothes. So naturally, sometimes they try to satisfy that curiosity by negotiating with someone roughly their own age. It's called "playing doctor", since it's frequently put in the form of a game where one child is the doctor and the other the patient, who takes off their clothes for examination like at the real doctor's office.

For legal reasons, this game is almost never played all the way in visual media, being mentioned off stage, or interrupted before too many clothes come off. A common "bit" is for a parent to catch the children doing this and completely overreact, making the kids more confused and traumatized than the game ever would have. A common subversion is for precocious or overly intellectual children to actually be roleplaying medical professionals without any intent of taking off clothing. Indeed, this subversion is much more common in media than the "straight" use, as you'll see in the examples section.

It's considered kind of cute for very small children to do this, less so as they get older, and if either participant has hit puberty, they've lost the Children Are Innocent excuse. Indeed, if anyone past puberty suggests "playing doctor," it's an Unusual Euphemism. And if one child participant is significantly older than the other, it's usually a bad sign.