The City vs. the Country 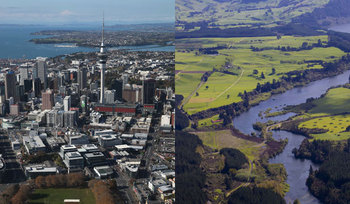 It's a nice place to visit, but I wouldn't want to live there.
Advertisement:

These are two very common plots in fiction and naturally occur quite often in real life too. But their execution is extremely different and often leads to a Double Standard.

Plot A: Alice is a sweet Country Mouse who grew up in a sparsely-populated rural area, either on a farm or simply a small town in the middle of nowhere. Either of her own desire or against her will she moves to the big city. She doesn't like it because it's so much bigger, city people aren't as friendly and they look down on her because they consider her a backwoods hick. This kind of plot is usually resolved by Alice getting to move back to the country and appreciating it more if she originally hated it, or acclimating to city life and making new friends who appreciate her good nature.

Plot B: Bob is a City Mouse who lives in a big city with lots of friends and loves to go everywhere. He's likely very independent and materialistic as well. Almost always against his will, he is moved to a much smaller area be it the suburbs or a small town. He will hate it because it's boring, there's nothing to do, and country people are completely different from city people. If it's a farm he'll resent having to help out on the farm. In the process, he may learn how hard farming really is, or he may not. But by the end of the story, he'll have learned An Aesop and come to like his new home, realizing it is much better than his old life.

Plot B2: Alice used to be a Country Mouse but moved to the big city and has now become a City Mouse with a glamorous life and career, and is usually embarrassed by her humble origins. Then she's forced to go back home for some reason, either temporarily or permanently depending on the story. Similar to Plot B, although there will usually be a rekindled forgotten Childhood Friend Romance as well.

Plot B3: Alice used to be a Country Mouse, but rather than leaving her hometown for the city, she has witnessed the town growing into a city through one circumstance or many. She will be overwhelmed by the rapid urban development and the people moving in droves, and the pros and cons they bring with it. She'll either accept the changes or leave to another quieter place away from the noise.

The Double Standard decrees that a country person who doesn't like life in the city is free to move back home, or their down-home nature works to their advantage and they never learn the plus-sides to living in the city (and the story will imply that there aren't any); meanwhile, a city person will just have to put up with the country and learn to accept a simpler life. Some works will portray the city as being full of criminals and shady people, often with a lot of drugs thrown in while the country people will be more innocent. Compare Welcome to the Big City, Country Mouse, City Mouse, and Country Cousin. It's worth noting that the characters who move do not necessarily have to fit the Country Mouse/City Mouse character types.

Heroic protagonists are often simple farm boys who are thrown into a larger world. One of the supporting characters may be a more urban, streetwise character who is initially depicted as cynical and dubious at best. This is in sharp contrast with the country boy hero's wholesome nature. Characterizations frequently gloss over the fact that people of rural upbringing are often conservative, traditional, and possibly unaccustomed to ethnic diversity.

So or so, the story will often depict how different people (and life) of the city/country are. To the point that they may not understand each other anymore.

Blitz Evacuees is often a very specific form of plot B (and one of the few kinds where the city-loving characters in the country might end up going back — after the war is over, of course). Compare Arcadia and From New York to Nowhere. There's a strong tie to New Media Are Evil too, the city representing new media in this case.

Move From Country To City:

Moving From City To Country: