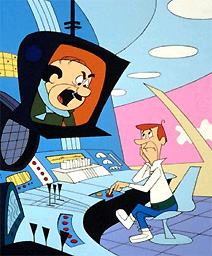 JETSOOOOOOON!!!
"Listen to me, you stupid little runt. I own you. You're my bitch! So don't walk around here thinking you have free will because you DON'T. I can break you anytime I want! So settle in, because you are in this for the long haul!"
— David Harken, Horrible Bosses
Advertisement:

The boss that means well and does well, except for a few things. He's certainly given the higher-ups every reason to have confidence in him. He's competent, knows what he's doing, and keeps his workers motivated. It's the way that he keeps them motivated that's the problem. He'll yell at you for being a minute late, give you mountains of work the night before it's due, have a heart attack any time you even suggest that you might deserve a raise for all your hard work, and nearly rip your head off at the drop of a hat. Might smoke big, smelly cigars, and is often a Sir Swears-a-Lot, assuming the medium is R-Rated (or the equivalent). He may be a money-grubber, egocentric, or just plain ornery. Very often played for laughs.

Compare Dr. Jerk, Da Chief, and Da Editor, three other tropes with frequent crossover. For the Drill Sergeant Nasty, it's an unavoidable part of the job. Not to be confused with a Bad Boss, who isn't just a Jerkass to his co-workers, but so evil that he actually maims or kills them, though quite a few are both. Related to the Pointy-Haired Boss (except for their respective competence levels). Such bosses may feature in a negative Job Song.

They are a group of snobs who are intolerant of failure.

They are a group of snobs who are intolerant of failure.