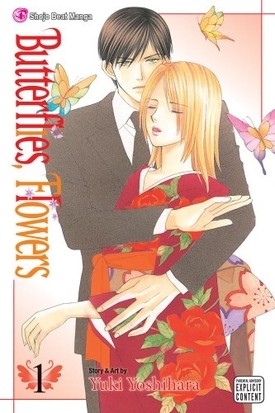 Butterflies, Flowers (Chou yo, Hana yo) is a josei manga series by Yuki Yoshihara, was serialized in the magazine Petit Comic from 2005 to 2009. The English version is licensed by Viz Media.

Choko, the daughter of a formerly wealthy family fallen on hard times, is an entry-level administrative worker at her first job. She ends up under the thumb of hot but tyrannical Administrative Department Director Domoto ("say it with ♥!"), who turns out to be one of her family's former servants - one on whom she had a pretty obvious puppy crush as a girl. Despite being a dictatorial, slave-driving and borderline sexually harassing boss at work, Domoto turns into Choko's devoted servant off-hours. Romantic comedy ensues.