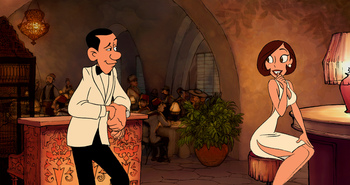 Here's looking at you, kid.
The Act is an interactive movie in which you control Edgar, who is cleaning the windows of a local hospital along with with his less competent brother, Wally. The plot kicks off when Wally decides to take a nap on one of the hospital beds, where the doctors mistake him for a patient who's scheduled for a brain transplant. You must help Edgar get into the hospital and save his brother, all while vying for the attention of the lovely nurse Sylvia.
Advertisement:

The player must guide Edgar through various scenes using a simple control scheme of turning a rotary knob left or right (as in the arcade version) or swiping left and right on an electronic device (on the iOS ports). Depending on the direction, Edgar's emotions or physical actions will vary. The first scene, for example, has Edgar daydreaming about wooing Sylvia in a fancy restaurant. Moving to the right makes Edgar get bold, while going to the left makes him more shy. If the player fails to make Edgar behave correctly, they will lose one of three lives (measured by clapboards), and the scene will start over for another try. With no voice acting, the game mainly relies on the characters' body language as hints for the player to know if they're doing something right or wrong.

The Act was initially released by publisher Cecropia as an arcade game, with later plans to release it to computers and video game consoles. Unfortunately, despite positive reception, in late 2007 Cecropia's founder Omar Khudari announced

that he was closing the company, citing a lack of publisher interest. Years later, another company named React Entertainment was formed to realize Khudari's original goal and published the game for Apple devices in March 2013. However, the game ended up being pulled from the App Store in early 2015, with React Entertainment closing in the process. Since then, the original arcade version (released in both dedicated and kit form) is highly sought after by collectors.