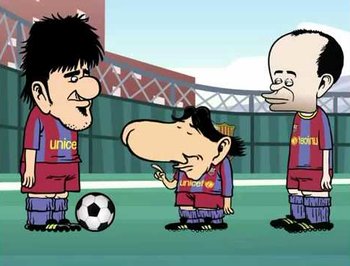 Left to right: David Villa, Lionel Messi and Andrés Iniesta.
Marca Toons was a Spanish comedy web animation series that ran on the website of sports newspaper Marca from January 2007 to June 2010 as an All-CGI Cartoon and from August 2010 to January 2012 in 2D. It starred cartoon depictions of Real Life La Liga stars, mostly FC Barcelona and Real Madrid CF players, and turned current events related with both clubs into comedy sketches.