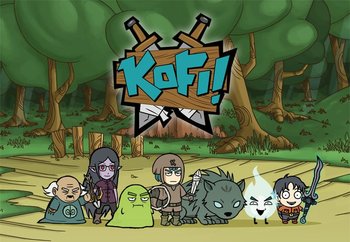 Kofi! is a web animation series created by Loftur Studio, located in Spain. It was first brought to the web in 2014, with an English adaptation releasing in 2018. Currently, the series consists of three seasons.

In Kofi's world, everyone is fully aware that they live in a video game. Some, such as the Mercebinaries, go on grand quests in order to defeat monsters, get loot, and one day become as legendary as the fabled "Play Erwan". And then there's Kofi, a resident of Starterville so lazy that there are children at a higher level than him. Helping him along his journey to become a hero with the smallest amount of work required are a summoned Slime even lazier than Kofi, a disobedient Direwolf pet, and an elf best friend that's way more organized than Kofi but willing to do some shady things for money.

In 2019, a video game continuation of the series was crowdfunded: Kofi Quest: Alpha MOD.