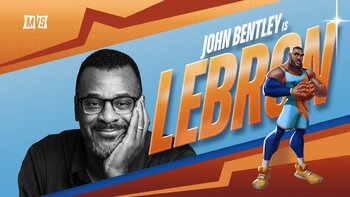 Well, technically, it's LeBron James as depicted in Space Jam: A New Legacy.
Bart: That's not Krusty the Clown!
Mr. Black: Wh-What do you think — I slapped a clown suit on some wino? (chuckles nervously and pulls at his shirt collar) I mean...
Barney: (dressed as Krusty) Yeah, Bart! I am so Krunchy the Clown! (belches)
— The Simpsons, "Kamp Krusty"
Advertisement:

Every now and then, someone in the biz will become just the right kind of hot commodity. Kids are going crazy for 'em — slap their picture on a Trapper Keeper and it'll be gone from the shelf before you can say "cynical marketeering." What better way, then, to hype this piece of human merchandise than for them to star in their very own cartoon? Kids love cartoons, right? And here's the best part — they don't even have to be in it!

After all, celebrities are busy people, right? They're going places, doing things, making appearances. It would be downright rude of you to ask them to actually record their own voices for their cartoon show, wouldn't it? Especially when the draw of the celebrity name is expected to make up for lack of decent writing and animation. Plus you would have to pay them!

Yes, all you need is a licensing fee, a barely reasonable voice impersonator, a dirt-cheap animator, and an option of IN SPACE and you've got a cash cow the whole family can enjoy!

Alternately, this can happen if you've got the license to some aging or dead celebrity's likeness, and you're willing to squeeze every last drop of money out of it.

Especially common with shows about musicians, since you can drop in a song by the musicians in each episode to up the appearance of celebrity-association. At least with the music segments you'll probably have to keep their singing voices, leaving your own Non-Singing Voice actors to play them for the rest of the show.

Often, the characters are Flanderized versions of the celebrities' public personas, and can therefore veer into third-party Adam Westing.

Compare and contrast Celebrity Toons, which may star the person in question.