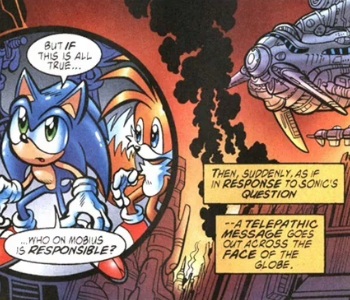 When a character asks a question, and the movie cuts, pans, or otherwise shifts to an image of the implied answer. A variant of this will have the character make a significant remark (e.g., "Some people just naturally make fools of themselves"), and the camera cuts to a character doing exactly that sort of thing. A still further variant is to have another character, completely uninvolved with the first conversation, answer the question with a line identifying the answer ("What kind of loser takes a job at Burger Fool?" "Hey, did your brother tell you he got a new job?").

The usual question is Who Would Be Stupid Enough?, but there are many questions that can be answered this way. It is a critical tactic if the viewers need to know the answer, but the character asking for it must be kept in the dark.

In literature, the usual accompanying phrase is "As if in response..."

Compare/contrast Gilligan Cut, Description Cut, "I Know What We Can Do" Cut, Ironic Echo Cut and Oblivious Mockery.