Film / The Hound of the Baskervilles 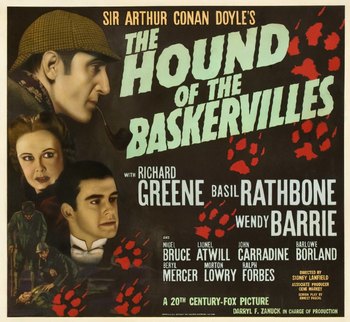 "Through the gathering fog on a lonely English moor stalks an unearthly beast...its trail of horror so terrifying only Sherlock Holmes dare follow!"
Sherlock Holmes: There are still some gaps to be filled, but all in all, things are becoming a little clearer.
Dr. Watson: Not to me, I assure you. It's still a hopeless jumble. Mr. Franklin, Dr Mortimer, the Barrymans; put it all together and what have you got?
Sherlock Holmes: Murder, my dear Watson. Refined, cold-blooded murder.
Advertisement:

A 1939 film from 20th Century Fox based on the classic mystery novel The Hound of the Baskervilles. This was the first time that Basil Rathbone and Nigel Bruce would play Sherlock Holmes and Dr. Watson. The film proved so popular that a sequel The Adventures of Sherlock Holmes was released the same year, followed by a long running radio series.

The plot remains fairly faithful to the book: Sherlock Holmes and John Watson are asked to consult for Sir Henry Baskerville, heir to the Baskerville estate and the last in a line supposedly haunted by a family curse. Apparently, the family is trailed by the Hound of the Baskervilles, a demonic dog that is responsible for all the deaths of the Baskervilles in the region.

Holmes dismisses it as a fairy tale at first but, at the explanation of the recent death of Sir Henry's uncle in mysterious circumstances (unharmed but with only the prints of an enormous dog nearby and his face fixed in an expression of terror), he concedes to send Watson to Baskerville Hall to investigate, saying that he's too busy to go himself.

From there the game, as they say, is afoot.