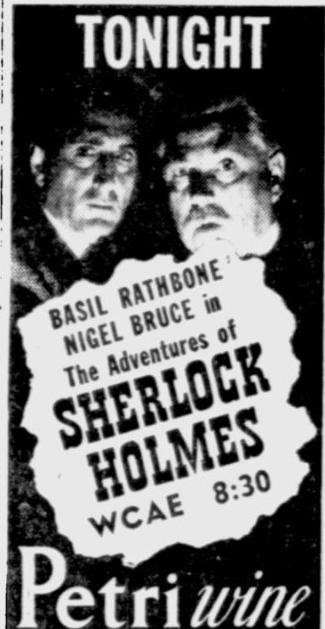 The New Adventures of Sherlock Holmes was a long-running radio series that spun off from 20th Century Fox's very successful films The Hound of the Baskervilles and The Adventures of Sherlock Holmes, both of which starred Basil Rathbone as Sherlock Holmes and Nigel Bruce as Dr. Watson. Fox had planned to do more films but didn't because of a dispute with the Doyle Estate, which didn't hinder this radio drama. When Universal picked up the rights, the radio show still kept going — and was still kept firmly in the Victorian Era. The series, which debuted on the Blue Network and later moved to Mutual, aired from 1939 to 1950.

The show had a standard format: Dr. Watson, now retired and living in California, would regale the host with a story of his past adventures with Holmes. Despite the title, the show was a mixture of Conan Doyle's stories with new pastiches, including a six-part adaption of The Hound of the Baskervilles, of which sadly only one installment survives.

Rathbone, fearing being typecast and wanting to move on to other projects, left the radio and film series in 1946. Tom Conway (George Sanders' brother) was tapped to replace him, and Nigel Bruce was promoted to top billing. Despite his attempts to emulate Rathbone, Conway wasn't very popular with audience and after completing one season he left and so did Bruce, who were replaced by other actors for the rest of the show's run.