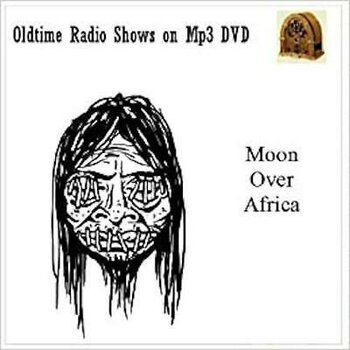 African drums are talking
Speaking of voodoo, withcraft, mystery, and madness
Their rhythmic beat breaks through walls of silence to bring you a story of Africa
Africa, that land where anything can happen
Listen
Advertisement:

Moon over Africa is a South African radio serial from 1937. The story follows the adventures of Professor Anton Edwards as he journeys through French West Africa in search of the lost Atlantis, accompanied by a talking head that speaks a mysterious ancient language and guides their way. Prof. Edwards is accompanied by his daughter Larna, their assistant Jack, and their loyal Masai warrior companion Nguru.

Not much is known about the production of the serial, but the whole thing is available on the Internet Archive