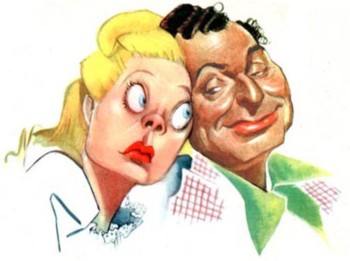 A sort-of spinoff from The Jack Benny Program, this NBC radio sitcom ran from 1948 to 1954. As the title suggests, it starred the real-life husband and wife team of Phil Harris and Alice Faye as fictionalized versions of themselves.

The series followed the home life of bandleader Phil, wife Alice, and his two girls Phyllis and Baby Alice. His best friend is Frankie Remley, his suppposedly-inept guitar player ("Lucky I'm in your band, ain't it?"), and the thorns in his side are Julius the grocery boy (who is madly in love with Alice) and his brother-in-law Willy.

The show was sponsored by the Rexall drug company, and several times episode plots involved some mess Phil makes of the yearly contract, breaking something in one of the stores, or even taking it upon himself to sell everything in the store for a penny, among other things. The humor on Alice's side revolved around her large fortune (as well as her faded movie career) and her occasional "Ah, your mother..." insults when she's at her wits end. Phil is often portrayed as Too Dumb to Live, the usual things on his mind being pride in being from the South, thinking he's smarter than he really is, and his ego (the size of a house).

Two musical numbers were performed each episode, one by each of the leads.