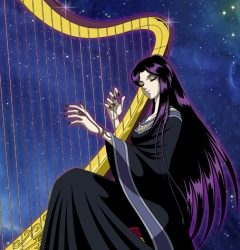 "French impressionism has left us with a rather limited version of the harp, as if its most obvious characteristic were that of lending itself to the attention of loosely robed girls with long blond tresses, capable of drawing from it nothing more than seductive glissandi."
—Luciano Berio, in the liner notes for his Sequenza II

The harp's crystalline and delicate tones, as well as its graceful shape, will emphasize the femininity of the woman playing it. Not to mention that it gives the harpist a definite air of dignity and nobility. As such, harp-playing women in fiction are usually important to the plot.

This trope is Older Than Radio but not Older Than Steam, and doesn't generally come in to play much in works from before the French Revolution. As such the Wandering Minstrel (a medieval trope) will often be male and play the harp, and playing the lyre also Gender Flips this trope just as often as not (most of the 'inversions' listed below concern hand-held harps and lyres, rather than the sort of grand harp one would see in an orchestra). In the very, very rare occurrences where a man is shown playing the harp, he will be at least a particularly effeminate Bishōnen or Pretty Boy.

In ancient Western culture, the harp was if anything a masculine instrument. Thus we see figures such as King David and the Greek god Apollo playing the harp (or lyre) without any loss of masculinity.

If the harp is weaponised, see Instrument of Murder and Musical Assassin.

This trope is Truth in Television, since real-life harpists are mostly female. This started because in the 18th Century in Europe, it was considered highly improper for women to play most instruments: the harp was one of the few that wasn't considered scandalous for a woman to play (along with keyboard instruments).

Also note who else typically plays the harp: Angels, elves, and people who died and went to Fluffy Cloud Heaven.

Almost always also an Elegant Classical Musician. Compare Feminine Women Can Cook and Textile Work Is Feminine for a much less refined way to show femininity. For a modern counterpart of this trope, see Female Rockers Play Bass.