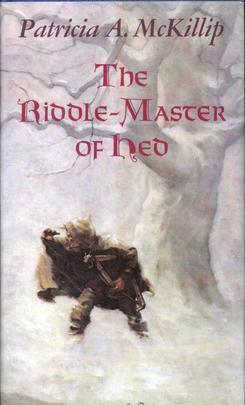 The Riddle-Master Trilogy is a High Fantasy trilogy by Patricia A. McKillip with a Morality Kitchen Sink. The novels in the trilogy are:

The third novel, Harpist in the Wind, was nominated for the Hugo Award and the World Fantasy Award, and the series remains one of McKillip's most popular works. Several Omnibus editions have been produced under various names, including Riddle of Stars, Quest of Riddlemasters, and The Riddlemaster's Game.

The series takes place in a world where all wisdom is couched in the form of riddles to be solved. The land is divided into kingdoms whose rulers are magically linked to their realms. This "land-rule" is governed by a mysterious figure known as the High One.

Morgon was a student before his parents died and he became the land-ruler of Hed. He was born with a birth mark of three stars on his forehead which are the subject of prophecy, although he tries to ignore that. When the High One's harpist, Deth, comes to visit during his travels, he informs Morgon that Raederle of An's hand in marriage was promised to whomever could defeat Peven of Aum in a riddle game and that An has been in an uproar ever since Peven told the last person to challenge him that he was too late. Morgon admits that he won Peven's crown in a riddle game and resolves to go with Deth to visit Raederle and offer himself in marriage.

Before they can get very far, their ship is attacked by shape-changers who are determined to kill The Starbearer aka Morgon. For his very life, Morgon travels with Deth to the High One on Erlenstar Mountain in search of an answer to the riddle of three stars.

The second book follows Raederle of An, Lyra of Herun, and Morgon's sister Tristan as they search for Morgon, Deth, and the High One, who are all now considered missing ever since Morgon reached the High One and fell out of all contact. The third book deals with the growing war against the shape-changers and the continuing search for the truth about the High One.

Alternative Title(s): The Riddle Master Of Hed, Heir Of Sea And Fire, Harpist In The Wind, Riddle Of Stars