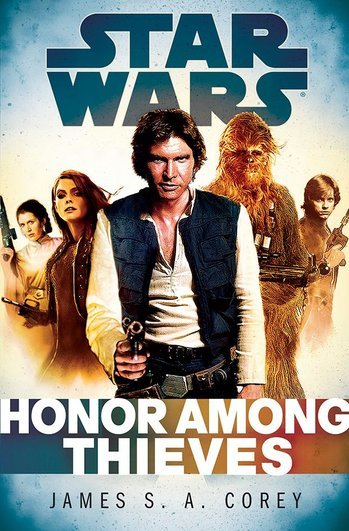 Star Wars: Honor Among Thieves is a Star Wars Legends novel by James SA Corey. It makes up the Empire and Rebellion duology with Star Wars: Razor's Edge.

About a year after A New Hope, a Rebel spy named Scarlet Hark who had been out of contact for months signals for extraction, and Han Solo is sent to retrieve her. But when he finds Scarlet, he's drawn into her mission. An Imperial astrocartographer has stumbled upon a secret that could change the course of the war, and Scarlet is determined to get the Rebellion there first. Evading Imperials and bounty hunters, Han, Scarlet, and Chewbacca chase down leads and race the Empire across the galaxy.

Honor Among Thieves is the second of the planned Empire and Rebellion trilogy of novels set during the Original Trilogy era, designed to evoke the feel of classic Star Wars, starring (in order) Leia, Han, and Luke. Heir to the Jedi was intended to be the third, but Disney's Continuity Reboot of the Expanded Universe interrupted this plan. Razor's Edge and Honor Among Thieves were deemed to be Legends works, and Heir to the Jedi was rewritten to be one of the first stories in the new Star Wars Expanded Universe. Honor Among Thieves therefore holds the distinction of being the last novel published in the Legends continuity.

Also included is "Silver and Scarlet," a short story narrated by Scarlet Hark on one of her other Rebel spy missions.

Honor Among Thieves contains examples of the following tropes: