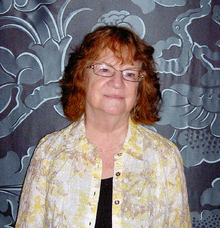 Patricia Anne McKillip (born February 29, 1948) is an American writer known for her unusual and sometimes surreal, dream-like fantasy works. Her breakout novel was 1974's World Fantasy Award-winning The Forgotten Beasts of Eld, a fairy-tale-like story of a beautiful sorceress on a remote mountaintop. She followed that up with the very popular Riddle Master Trilogy, a High Fantasy about a farmer-prince who has three stars on his forehead, and a prophecy calling nameless shapeshifters out of the sea.

She won another World Fantasy Award for Ombria in Shadow and Mythopoeic Fantasy Awards for Something Rich and Strange and Solstice Wood. Her other works include The Sorceress and the Cygnet, and its sequel The Cygnet and the Firebird, as well as The Changeling Sea, The Book of Atrix Wolfe, Winter Rose, Song for the Basilisk, The Tower at Stony Wood, In the Forests of Serre, Alphabet of Thorn, Od Magic, Solstice Wood, and The Bell at Sealey Head. She has also written one Science Fiction novel, Fool's Run.

She was given a special Lifetime Achievement World Fantasy Award in 2008.

Tropes found in other works include: