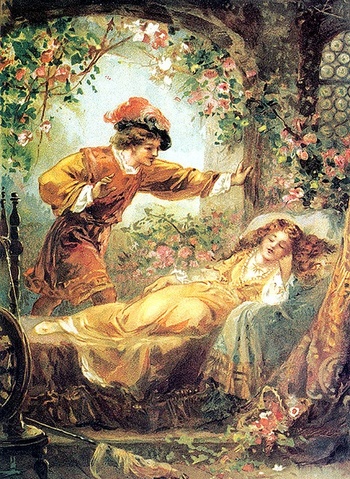 "But scarcely had she touched the spindle when the magic decree was fulfilled, and she pricked her finger with it. And, in the very moment when she felt the prick, she fell down upon the bed that stood there, and lay in a deep sleep."
Advertisement:

A king and queen, childless for many years, finally succeed in giving birth to a little girl, and invite all the fairies they can think of to celebrate. Unfortunately, they forget or otherwise ignore one, who shows up at the christening anyway and curses the girl to one day prick her finger on a spindle and die. None of the fairies can dispel the curse, but the youngest one succeeds in softening it from death to a death-like sleep.

The king and queen order all the spindles in their kingdom to be burnt, but the young princess finds one they happened to miss. She finds an old woman sitting there spinning: in some versions an innocent civilian; in others the Wicked Fairy in disguise. The princess is fascinated and asks if she can try spinning. Predictably, the moment she picks it up, the curse comes into effect, and she, accompanied by the rest of the castle, falls into a deep sleep.

Many years later, a prince (sometimes a king) makes his way into the now-overgrown sleeping castle, and finds the princess. He wakes her (iconically with a kiss) and they fall in love and marry (and eventually have offspring).

Unfortunately, his mother, who has ogre blood, is jealous of the prince's new wife, and when the prince leaves on matters of state, she demands to have the princess's young children, and then the princess herself, killed and cooked for her supper. The cook manages to hide the unfortunate family and fool the queen with various cooked animals instead. This all comes to naught when the queen hears the princess and her kids at the cook's house, however, and she prepares a big pot of nasty, venemous creatures to kill them. Fortunately, the prince arrives home just in time, and the queen falls into the pot of nasties, dying a Karmic Death and leaving everyone to live Happily Ever After. (In an alternate ending, the queen, thinking wife and kids are safely dead, realizes her son may not be so happy about that and tries to pass herself off as the princess. The prince works it out by asking the marriage bed. Queen is duly put to death and prince is reunited with princess and kids.)

This, at least, is the full plot of the Charles Perrault version of the tale. In most modern versions, starting with the Grimms' "Briar Rose" (Dornröschen), the second part of the story, in which the princess must cope with the jealous queen, is omitted. The Grimms in fact included the German version of this part as a separate tale (called "The Mother-in-Law"), ending with the king sentencing his own mother to death.

Still older versions of the same tale type, among them "Sun, Moon, and Talia", replace the prince with an already married king. In these versions, he rapes the princess while she lies sleeping and she gives birth to twins before waking up when one of the babies sucks the splinter out of her finger. The cannibalistic queen in this case is the king's wife. Compare "The Brown Bear of the Green Glen".

Unsurprisingly, Disney disregarded these earlier versions when they animated Sleeping Beauty in 1959, following the Grimms in omitting the whole second part of Perrault's tale, and incorporating several songs from the 1890 Sleeping Beauty ballet by Pyotr Ilyich Tchaikovsky.

Curse of Briar Rose, the first of the Dark Parables games, uses a sort of composite of the Grimm and Perrault versions to create a backstory for the sleeping princess, who has been sealed inside a castle in Scotland for a thousand years. When the prince kissed her, it woke up everyone in the castle except her, and he himself died from her curse. Now, the seal on the castle is broken, and giant briar plants are escaping into the city. Briar Rose herself is a significant character in the series, and more parts of her story are revealed as the subsequent games unfold.

There's also an anime version that's a part of Grimm's Fairy Tale Classics (from 1989), based on the Grimms' "Briar Rose".

Both the Perrault text

and the Grimms' "Briar Rose"

can be read online.

"Sleeping Beauty" and its variations contain examples of:

Tropes found in Part I of Perrault's "Sleeping Beauty" and the Grimms' "Briar Rose":