Needlework Is for Old People 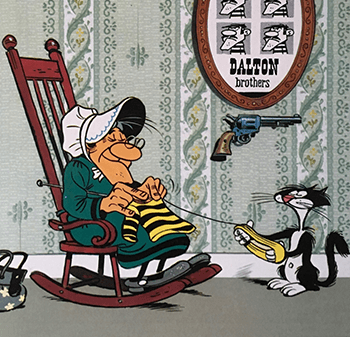 This trope is for when needlework (knitting, sewing, crochet, darning, etc) is associated with the elderly in fiction. When Textile Work Is Feminine and this trope love each other very much, you get the idea that needlework is for "grannies" or "old ladies", so it's slightly more common among elderly women than men, but elders of both sexes are seen doing needlework and with this trope, younger women think it's for old people too.

A younger Fashion Designer will often get away with sewing, but knitting, crochet, etc is still associated with the elderly. Often the old person who does needlework is either seen as a popular-with-kids Cool Old Lady or Cool Old Guy or a well-meaning but boring/embarrassing older family member. Both types will generally make clothes for their younger family members, which will either be liked or be seen as too ugly/itchy/boring, and the Homemade Sweater from Hell is often knitted by an elderly relative (often a grandma, grandpa, or great-aunt).

Old people who do needlework are usually friendly no matter where they fall on the popularity spectrum, though some evil elders (like an elderly Wicked Witch, for instance) may do needlework to exploit the stereotype of the friendly old lady/man.

This trope is Older Than Radio because many fairy tales and nursery rhymes mention "the little old woman sitting at her spinning wheel" or similar.

Sometimes Played for Laughs by having someone magically turn elderly and be seen instantly doing needlework or showing someone doing needlework who's elderly but also not human, for instance a Nearly Normal Animal, Civilized Animal, Funny Animal, mythical creature or alien.

Common for a Granny Classic. Contrast Knitting Pregnancy Announcement because, with that trope, the woman is young enough to be fertile. Truth in Television for some, but not others. Compare Games of the Elderly.