Literature / Danny, the Champion of the World 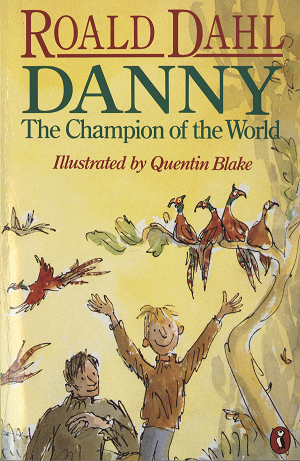 A 1975 Roald Dahl book about Danny, a half-orphan living with his father, a man with a certain fondness for poaching pheasants, in a caravan next to his father's petrol station/garage on a rather desirable plot in the English countryside. Mr. Hazell, the rich land-owner from whose land pheasants are poached, is less than amused by this hobby and attempts to thwart Danny's efforts.

Danny, however, comes up with an Evil Plan. All very sweet and lovely, unless you're a pheasant. (Though even then, it has to beat the fate Hazell had in mind for them....)

There is, of course, a film; a rather sweet one from 1989 starring Jeremy Irons and his son Samuel as the father and son, and Robbie Coltrane as Mr. Hazell.