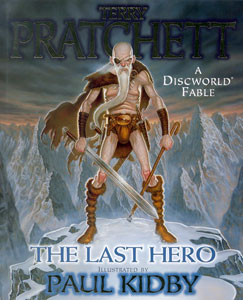 The 27th Discworld story, the text is roughly the length of a short novel, but each page features lavish illustrations by Paul Kidby, providing much amusing side info (such as a breakdown of different breeds of swamp dragon) and very epic images that capture almost every detail of the characters ever mentioned.

We start with Cohen the Barbarian and most of the Silver Horde (minus Old Vincent, who choked to death on a cucumber), last seen in Interesting Times, setting out on a quest. You see, Fingers-Mazda, the first hero, stole fire from the gods and the Horde feel that it is only fair, as the last of the true barbarian heroes, to return the stolen fire.

However, there is a problem. An explosion as big as they are planning to make on the top of Cori Celesti will collapse the Disc's magic field for several years. Of course, the Disc runs on magic, and without it the seas would dry up, the sun would crash and burn, and the turtle and the elephants would probably just stop existing altogether. All of this would happen in the first ten minutes.

So, Cohen's former subjects in the Agatean Empire tell Lord Vetinari to sort it out (as he and the city both have a reputation for getting things done). The solution is devised by the Wizards (after the usual heated debate) and Leonard of Quirm. They build the Kite, Discworld's second known spacecraft, powered by Swamp Dragons, to slingshot under the Disc and to try and beat the Horde to Cori Celesti. The craft is intended for three: Captain Carrot (by the logic that a policeman can find a reason to arrest anyone), Leonard (because the ship will need working on even after take off) and Rincewind (because he's met Cohen before and survived, and because he knows he will end up going anyway). Can they reach Cori Celesti in time to stop Cohen and his horde from their misguided crusade?

Not to be confused with Last Action Hero.

The Last Hero provides examples of: