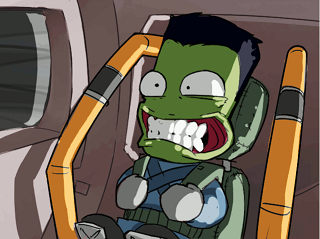 The black spots tell you it's working.note Image by timmon26

"My brains are going into my feet!"
— Dark Helmet, Spaceballs
Advertisement:

In order for astronauts and fighter pilots to withstand the large amount of G-forces incurred upon takeoff, high-G training is a critical part of the preparation for any launch. This is to prevent G-induced loss of consciousness caused by the forced movement of blood from the brain to the lower extremities. Research done since the 1970s has shown that training to resist G-induced loss of consciousness significantly extends the pilot's resistance to blackouts and extends their G-tolerance in both magnitude and duration.

The method of training pilots to withstand these high G-loads is fairly simple: stick them in a really big centrifuge and spin them around really, really fast.

Naturally, this has found a home in media, often exaggerated for comedic effect. Characters subjected to the centrifuge will appear to be traveling at Ludicrous Speed, complete with comically Flapping Cheeks, eyeballs bugged out, and squashed faces. In some cases, the hapless victims may even be Squashed Flat.

Note that this applies to more than just training centrifuges. For example, carnival rides provide another common source of hilarity. Normally harmless amusement rides become whirling machines of doom and vomit (whether hinted at or shown explicitly) in the hands of overzealous writers. Or some character could forcefully spin one or more enemies to incapacitate them with dizziness symptoms. After being subjected to the insanity, characters will often stumble off in a daze, followed up by a Non Sequitur, *Thud*.