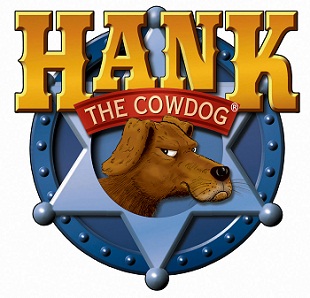 "It's me again, Hank the Cowdog."
— Hank, at the beginning of each book.
Advertisement:

Hank the Cowdog is a series of children's books written by John R. Erickson starting the titular hound. The adventures consist of the goings-on at the West Texas ranch where Hank acts as the "Head of Ranch Security." He is assisted (if you can call it that) by Drover, his sidekick and a chronic coward. Together, they work tirelessly to keep the ranch safe from any threat, be it moles in the garden or blood-thirsty coyotes raiding the chicken coop, with Hank's ego and Drover's bad leg providing plenty of humor along the way.

In September of 2020, a podcast series adapting the eleventh book was releasing, this time staring Matthew McConaughey.